EVERYTHING ABOUT FREE CODE EDITORS 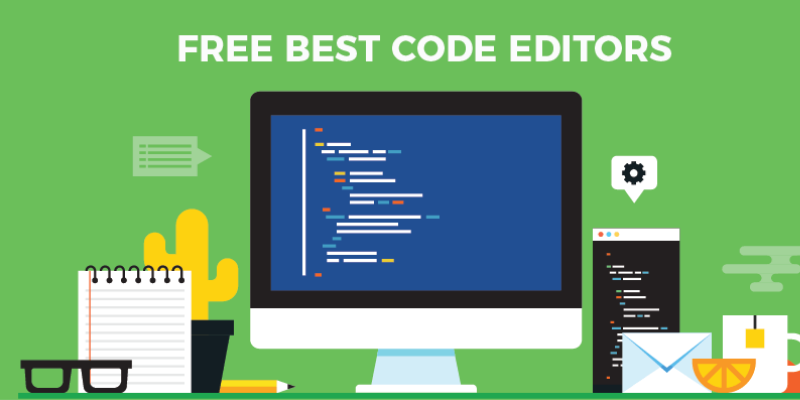 EVERYTHING ABOUT FREE CODE EDITORS

It’s very exciting for developers around the world to showcase their best code editor at IT trade shows and technology conferences. So when we talk about free code editors for Windows and Mac to use in  2022, we can not help but expect new features that we can start using right away.

In this article, we will talk about the best cross-platform encryption software. However, we will focus more on Windows OS and Mac OS as they are popular operating systems at the moment.

Most of these best code editors are free; You do not have to buy expensive licenses or the like to work with it. Just download a trial version of such software and see if it suits your needs. You can then turn it into paid software for yourself or for the company you work for.

In addition, we will also tell you about the most amazing code editors that you and your development team can use in terms of functionality. Because not all code editors are the same, some of them can not be used for large projects.

Notepad ++ is one of the most well-known code editors that developers around the world have been using for quite some time. This excellent application is developed in C ++. The first version was very simple. It did not have many features then, but Notepad++ received lots of positive reviews. Notepad ++ is a popular free code editor written in C ++. It uses a pure Win32 API that offers faster execution speed and small program size. It is one of the best code editors that only runs in Windows environments and uses a GPL license.

One of the most popular and useful code editors is Atom. Atom is a useful code editing tool preferred by programmers because of its simple interface compared to other editors. Atom users can send packages and them for the software. Millions of developers around the world are using it as it is an excellent application with a very easy and smooth interface that increases reliability and user-friendliness.

One of the cool features of this best free code editor is that developers can submit packages directly from the app. Atom is available for download on several platforms: Windows, Linux, and Mac devices. If you are a Mac OSX user, now is the perfect time to try this program. Can be easily accessible through  WINDOWS, Mac, and Linux platforms.

Coming from the background of software developed by technology giant Microsoft, Visual Studio Code is an excellent code editor that we have on the list. The app is fantastic software with extensive built-in support for Node.js, JavaScript, and typescript. AI enrichment is one of the most efficient and fastest features of this application. This means that the software reads all code that the developer writes in the application. As a result, it generates automatic responses to write codes. These answers are based on variable types, function definitions and critical modules. This application can be easily downloaded through the platforms of  Windows, Linux and Mac OSX.

Considered among the best code editors out there, there is still no comparison to Bracket’s code editor. Yes, it’s free, but what makes it really useful is the whole host of new and advanced features. This application is having a lightweight framework that is designed by the people working at Adobe. It is one of the best open-source editors and you can customize it to your liking. This application is available on Windows, Linux, and Mac devices.

Another code editor on this list that is one of the most popular code editors is NetBeans. It is open-source software that allows developers to develop applications using programming languages ​​such as PHP, Java, and C++, among others. This software also includes features like code analyzers that can debug your code for you and converters to change whatever you need to change. This software also uses converters to change anything that needs changing. If your applications were recently developed, remember that NetBeans allows you to update all your applications to take advantage of the new and improved Java 8 language constructions. This application can be used on Windows, Linux, and Mac devices.

If you enjoy working with dozens of different software at the same time and do not want to waste time letting the code editor take the time to run your code, then Bluefish Code Editor is for you. It is an excellent platform editor that can process and execute many code files simultaneously.

Another feature that developers love with this application is that they can edit their code from their remote workstation that can be found anywhere in the world. This application contains many different options for web developers and programmers that can help them write code, websites, and scripts to test the quality of their software. This app is available for owners of Windows, Linux, and Mac devices.

Automatically restore changes made to modified documents after a crash, deletion, or shutdown

It provides unlimited undo and redo functionality. Download hundreds of files in seconds.

If you are looking for the best coding editors to edit and get the best coding experience and that too for free, then you are on the right page. These are the 6 best code editors currently available. They are free to download and use. They are equipped with the best features that

developers need it on a regular basis. But all the available code editors are free and have a great user experience.