What is CAB And NRC: All You Need To Know About CAA And NRC 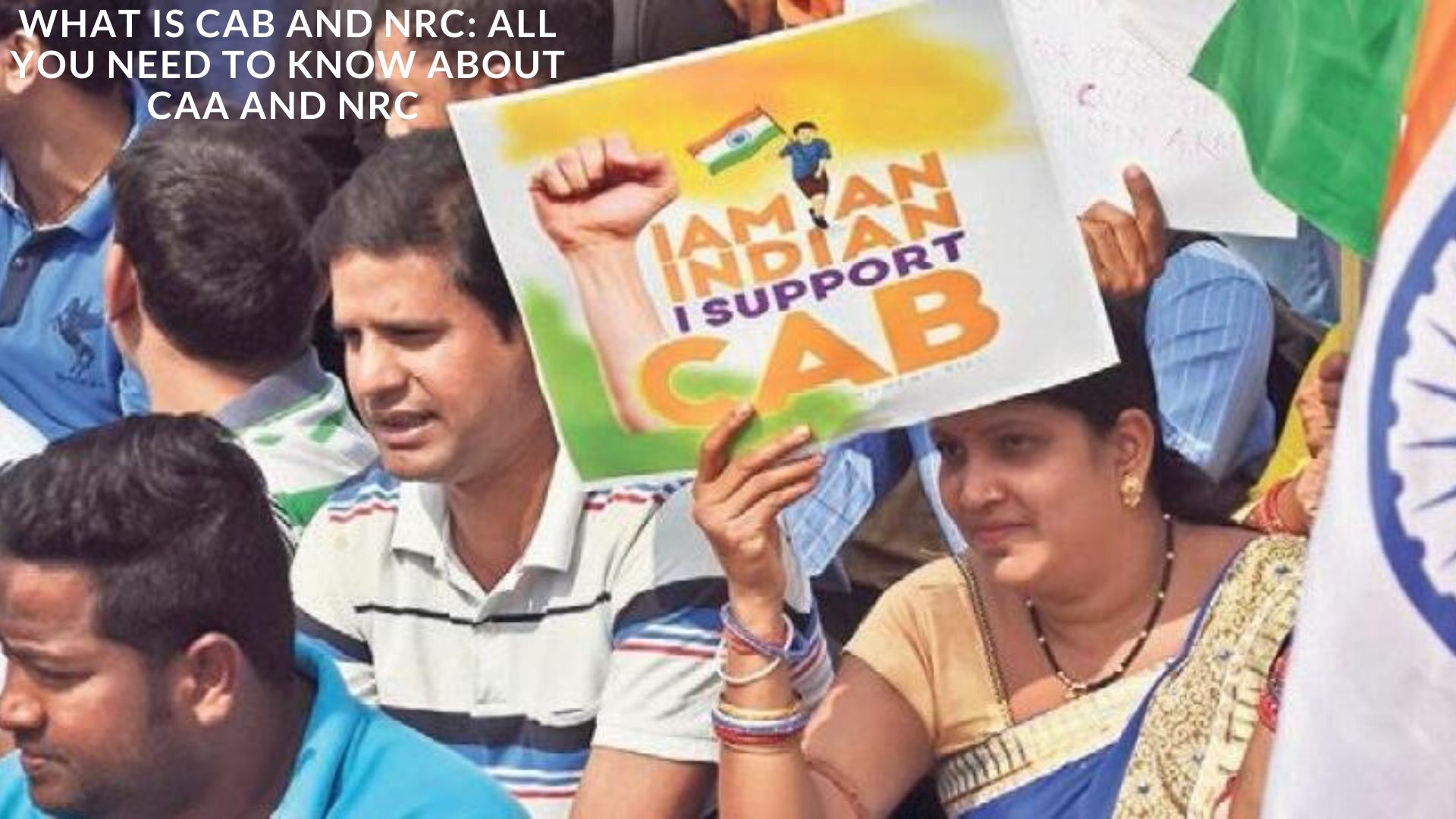 What is CAB And NRC: All You Need To Know About CAA And NRC

Union Home Minister Amit Shah introduced the bill in the Rajya Sabha on Wednesday, after which after about 6 hours of debate, Amit Shah gave answers related to the bill in the House. The opposition party is continuously opposing this Citizenship Amendment bill and is telling anti-constitution.

The bill is being opposed in various states of Northeast including Assam. Wednesday, the proposal to send the bill to the standing committee has been rejected. The committee polled 124 in favor and 99 in opposition. Shiv Sena walked out of the House and did not participate in the voting.

Protests in Assam were set on fire and vandalized, following which internet services in 10 districts were shut down for 24 hours. So what is special in this bill, on whom the opposition is opposing and what changes will happen after its implementation, understand here?

What is the Citizenship Amendment Bill?

The Citizenship Act bill announced by Parliament will be changed to the Citizenship Act 1955. Under this, citizens of Hindu, Teacho, Buddhist, Jain, Parsi religion coming to India from nearby countries including Bangladesh, Pakistan, Afghanistan will be granted citizenship.

What is the CAB proposal?

How will getting citizenship of India to be easy?

The non-Muslim refugees who come to India from these countries like Afghanistan, Bangladesh, Pakistan after this bill is converted into law, will become easy to get citizenship here. For this, they will have to spend at least 6 years in India. The scale of giving citizenship earlier was more than 11 years.

What is the bill opposing?

The opposition party surrounds the central government about this bill. The most opposition to the opposition is about religion. Within the new amendment bill, it’s been decided to offer citizenship easily to people of other religions apart from Muslims. The Opposition is taking over this matter and is describing this decision of the Modi government on the idea of religion.

The opposition of bill in NDA only?

The biggest challenge for the Modi government has been that this bill was opposed in its constituent NDA. within the Northeast, the Bharatiya Janata Party partner, the Asom Gana Parishad, openly opposed the bill and said that there was no ask the allies before bringing this bill, while it had been promised to speak. The Assam Gana Parishad was with the BJP within the Assam government.

Why are people attacked in the Northeast?

Recently, there has been an enormous protest in other states of Northeast including Assam regarding the National Register of Citizens. Promptly after the NRC, the Citizenship Amendment Bill has been introduced, which is being opposed. Several students from the Northeast, led by the North East Students Organization, opposed the bill.

Will BJP Party have political advantages?

In states like Assam, Bengal, the problem of refugees was quite dominating. Before the assembly elections in Assam or the Lok Sabha elections within the country, the BJP had vigorously raised the problem of NRC, which also benefited them. Now that the elections are getting to be held in West Bengal, before that the BJP once more became aggressive on the CAB bill. In such a situation, political matters also are being removed regarding this bill.

Passed bill in Lok Sabha But.

Who will be outside its scope?

Major opposition parties of India say that the Modi government wants to target Muslims through CAB. The reason for this is that according to the provision of CAB 2019, Muslims coming from Pakistan, Afghanistan, and Bangladesh will not be given citizenship of India. Many parties, including the Congress, are opposing the Citizenship Amendment bill on this basis. The government’s argument is that due to religious persecution, minorities coming from these countries are being given protection through CAB.

Which states will have the most effect on CAB?

Seven states of the Northeast will have the most effect on the CAB. Various regions of Northeast India, which fall under the Sixth Schedule of the Indian Constitution, have been released from the Citizenship Amendment Bill. The 6 list includes Assam, Meghalaya, Tripura, and Mizoram, etc. of Northeast India where there are autonomous district councils as per the constitution which guarantees the security of the rights of local tribals.

Its provision has been made in Article 244 of the Indian Constitution. The Constituent Assembly granted autonomous district councils by it in 1949 and gave the respective powers to the state legislatures. Aside from this, the regional council has also been discussed in the 6 lists. Everyone these aims to maintain the social, linguistic and cultural identity of the local tribals.

Impact of CAB on India’s population?

At the present time, 31,313 people from three nearby countries are living on long-term visas in India. They will quickly benefit from the CAB. This adds more than 25,000 Hindus, 5800 Sikhs, 55 Christians, two Buddhists, and two Parsis.

Next, we will talk about What is NRC bill? And Why There is a Ruckus on it.

What is NRC Bill?

The goal of the NRC or National Register of Citizen Bill is to illegally throw out the illegally settled intruders in India. Let us know that NRC Bill In Hindi has been completed only in Assam. While the country’s home minister Amit Shah has made this clear that NRC will be implemented all over India.

The government has made this clear that NRC has nothing to do with the citizens of any religion in India, its goal is only to throw out illegal infiltrators from India. Here we are explaining the important questions related to this.

The main goal of the NRC update in Assam; Identification foreign nationals and Indian citizens in the state. Organizations like All Assam Students Union and other citizens of Assam claim that Bangladeshi migrants have robbed them of their rights and are committed to criminal activities taking place in the Therefore those refugees should be sent to their country.

What does NRC mean?

The National Register of Citizen Bill NRC Bill Meaning is a register in which reports of all legal citizens residing in India will be kept. Let us tell you that NRC was started in 2013 under the surveillance of the Supreme Court in Assam. At present, this is not passed in any state other than Assam.

The government has spent around Rs 1,200 crore on the NRC Bill process, in which involving 55000 government officials and 64.4 million documents were scrutinized during the process.

What is required to join NRC?

To prove a citizen of India under NRC, a person must prove that his ancestors had come to India before 24 March 1971. Let this says that this has been implemented first in Assam to expel illegal Bangladeshis. The bill to start this all over the country can be brought in the next Parliament session. This will have various requirements and draft for implementation across India.

What documents are needed for NRC?

What will happen to those people who do not join NRC Bill?

If any person does not join the NRC Bill, he will be taken to the Detention Center as done in Assam. After this, the government will contact the countries where they are citizens. If the evidence given by the government accepts the government of other countries, then such illegal migrants will be sent back to their country.

We discussed the Citizenship Amendment Act of 2019 or what is CAB and NRC. Which has been passed in the Lok Sabha but NRC is not passed in all India, it’s passed only Asam. As we know, past a few days the environment of protest in India. Because the BJP government has been passed the cab bill in Lok Sabha. And some opposers are opposing it. So that is why we request people not to be misled by anyone, first read about this cab. We hope this article will help those people, who don’t know about CAB.

Our suggest blog:- Ayodya possession- A matter of discussion!